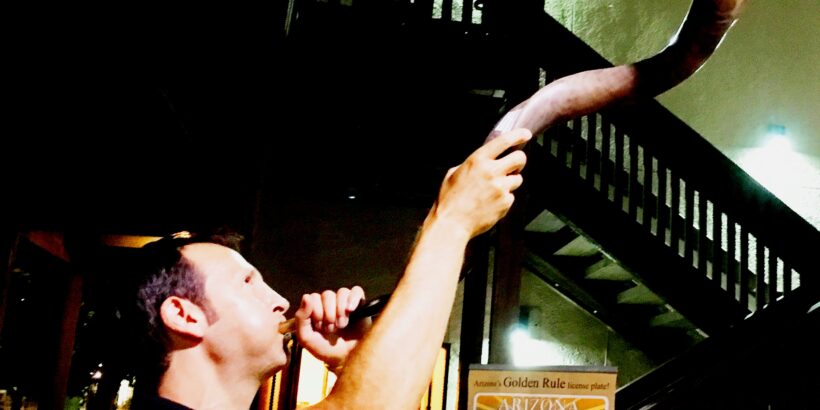 The sound of the Shofar brings hope

The shofar is a musical instrument created by hollowing out a ram’s horn, shaping it and polishing it.

In ancient times, the sound of the shofar was heard every day, calling the people to worship. Now people wait all year to hear the shofar as it is only heard on Rosh Hashanah, the Jewish New Year’s, and the end of Yom Kippur. The shofar is evocative of the Torah portion that we read on Rosh Hashanah, the story of the binding of Isaac. It calls to mind the image of the ram stuck in the bush that Abraham ultimately sacrificed instead of his son.

A person who sounds the shofar is known as the Ba’al Tekiah. While anyone can learn to blow the shofar, it’s more challenging to make the sounds come to life.

There are four traditional types of blasts for sounding the shofar. “Tekiah” translates into one single “blow” of the shofar. “Shevarim,” means “breaks” or “fractures,” and the single blast or Tekiah is now broken into three mediumlength notes. “Teruah” translates to “blast.” This blast is a series of very short, staccato sounds. Finally, the Tekiah Gedolah, which means “big” or “great” blast, is distinguished from the regular Tekiah by being drawn out for as long as possible.

The reasons for the different blasts have been interpreted by many, but one rabbi’s interpretation resonates with me because when I sound the shofar, it feels like a physical and spiritual experience. The end, however, is whole again. The lesson is that there is hope for each of us as we begin the new year with hope that we can find peace, as well as a sense of well-being, security and completion in the coming year.

I began my role as Ba’al Tekiah, one who sounds the shofar, almost by accident. I was volunteering at my son’s Jewish preschool and the teacher mentioned the upcoming Jewish New Year’s holiday (Rosh Hashanah) and explained to the class that the shofar would be heard. The next thing I knew, I was holding the shofar and demonstrating how to make the sounds for the class!

Since then, I have blown it each Rosh Hashanah and Yom Kippur at the temple and for Arizona Interfaith Movement events. I hold shofar sounding workshops with Fred Missel, a retired aerospace engineer who now lives in Arizona and has been blowing a shofar since third grade.

I remember a particular Yom Kippur break-the-fast, a few years ago when I met the elderly mother of our hosts. She was in her 90s with health issues which impeded her from attending services. It was the first Yom Kippur she was not able to go to temple or hear the sound of the shofar, something she looked forward to all year. I mentioned that I had my shofar in my car. At this moment, she leaned forward and sat up with a sparkle in her eyes. I brought the shofar in and sounded all four of the calls for her. She was so happy she started to cry. I am honored that I can be a part of this ancient ritual and help to continue one of our sacred traditions. If anyone is interested, I would be happy to do a virtual workshop. If you have any questions, you may contact Michael Greenland at 480-252-9122 or Michael@IntegrityCare. com.

Michael Greenland is a member of the Arizona Interfaith Movement.