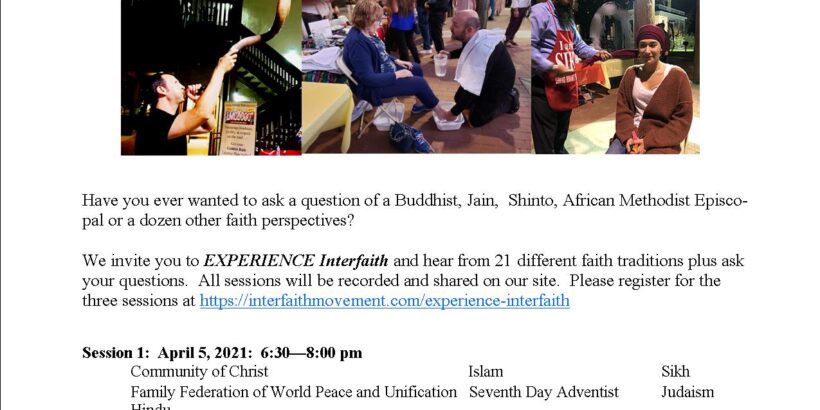 Have you ever wanted to ask a question of a Buddhist, Jain, Shinto, African Methodist Episcopal or a dozen other faith perspectives?

We invite you to EXPERIENCE Interfaith and hear from 20 different faith traditions plus ask your questions. All sessions are free. Each speaker will share about their faith very briefly, then there will be Q & A. Please check back after May 5th … we are about to include recordings of each session, which will be 20 minutes long and include Q & A.  Thank you.

Community of Christ: Sara Tubbesing, Speaker, currently serves as Mission Center President for the Arizona Mission Center and as a Heritage Seeker Minister for Community of Christ. First ordained to ministry in 1997 as an elder and later a high priest, she has pastored, provides sacraments, pulpit ministry, directed camps, and is now an administrator working with all of the Community of Christ congregations in AZ. She and Brian, her husband of 36 years, moved to Phoenix in 2017, where he also pastors a local congregation.
Islam: Azra Hussain, Co-Founder, President of the Arizona Islamic Speakers Bureau, whose Vision “is to dispel harmful stereotypes and help build peaceful communities where people of diverse backgrounds and faiths come to know and respect each other.”
Family Federation for World Peace and Unification: Bishop Timothy Henning, who is a teacher in the San Carlos school district and a member of the Family Federation for World Peace and Unification since 1975. Printable Handout
Judaism: Karolyn Benger, who is a Modern Orthodox Rebbetzin who regularly speaks on Women in Orthodoxy, Women in Islam, Democratization in the Middle East, Social Movements, Anti-Semitism, and Islamist organizations.
Hindu: Anita Rangaswami, who envisions ethical, rational, inspired people who respect universal moral values and codes of conduct working together, to advocate for and support, the Golden Rule, the natural environment, health, wellness, and peace among diverse people, so the world CAN BE a better place for current and future generations.
Seventh Day Adventist: Rev. Ray Navarro: Downloadable handout Bio: Pastor Ray Navarro is pastor of the Tempe Seventh-day Adventist Church since 2006. He has a Masters of Divinity degree from Andrews University, Michigan. He has been married to Elisa for 32 years and they have one son, Ray Joshua. Pastor Ray has been a member of the Council of Religious Advisors at Arizona State University and enjoys reading, computer graphic designing, working with tools, writing poetry, and research.
Sikh: Jaswant Sachdev, who has been a humble volunteer for Sikh Faith spearheading the cause of Sikh Identity in Arizona. Dr. Sachdev is a member of the faculty of Carl T. Hayden Veteran Administration Medical Center where he is now practicing as a Neurologist.

African Methodist Episcopal: Rev. Helen Hunter — Powerpoint handout and Downloadable Handout
Christian Science: Diane Hanover, who serves as the Christian Science Committee on Publication for Arizona. See ChristianScience.com
Baha’i: Zarrin Caldwell, who worked with international nonprofit organizations for ~20 years; served in elected, paid, and voluntary roles in interfaith and Baha’i communities; currently produces podcast on humanity’s spiritual heritage, https://www.buzzsprout.com/280970. ALSO, Dr. Anthony Kamson, whose working experience includes positions in management, research and training as well as ownership of a consulting firm. Current efforts as a registered investment representative involves an initiative for a more inclusive and equitable financing system for sustainable and 21st century lifestyles for middle market rural communities, worldwide.
Humanism: Joe Blankenship, who is a member of and previous Board member of Humanist Society of Greater Phoenix; President and Board member of Americans United for the Separation of Church and State – Greater Phoenix chapter, and Board member and Treasurer of Secular Coalition of Arizona.
Jain: Mahendra Shah, who is a Jain teacher, he teaches Jain religion to Sunday school students at the temple built by JCGP. He was actively involved in building of the Jain Temple right from the beginning. He lives in Phoenix with wife Sandhya, son and daughter-in-law, and two beautiful grand children. His interest include travelling, religious studies, and community service.
Independent Catholicism: BishopJorge Eager, who is founder and spiritual director of the Shrine of Holy Wisdom in Tempe, Az: a center for the study and practice of holistic spirituality founded in 2001, Resume, Downloadable Handout

Church of Jesus Christ and Latter-day Saints: Rich Gulbrandsen, who is a member of The Church of Jesus Christ of Latter-day Saints and has served as a missionary (Mexico City 1973-1975), Stake President (2002-2010), Mission President (Argentina 2010-2013), and President of the Dominican Republic Missionary Training Center (2017-2019). He and his wife Karen have 6 children and 15 grandchildren.
Sokka Gakai International (SGI) Buddhism): Ed Casper, who has served for many years in many capacities to further the mission of the Arizona Interfaith Movement and is an active speaker on the AZIFM Speaker’s Bureau. He assists AZIFM educational program planning on all levels and is active in the community working for social justice and legislative support.
Followers of Jesus Movement: Rev. Jannah Scott – Handout info: https://thefellowshipfoundation.org/jesus-model// Jannah is a follower of Jesus whose greatest desire is to shed the love of Christ to all in everything she does, to everyone she meets (2 Corinthians 5:14-15 The Passion Translation).
United Church of Christ: Rev. Rock Fremont, who is a spiritual director and ordained minister of the United Church of Christ, currently serving as Senior Pastor at Shepherd of the Hills UCC. Originally ordained in a uniting church in India, Pastor Rock has a passion for unity and inter-spirituality and is currently studying with a Roshi in the Diamond Sangha Zen Tradition. In the past, Rock has served in chaplaincy on Arizona’s Death Row and homeless populations, and brings a passion for lifting up those most vulnerable among us.
Scientology: Les Koel, who has been studying and practicing Scientology for over 40 years. He is a lecturer and an ordained minister trained to deliver Scientology spiritual counseling known as auditing. Downloadable Handout
Hare Krishna: Syama Mohini dasi, who has been practicing Krishna Consciousness for over twenty years. She has served ISKCON of Phoenix as Temple Vice President and Director of Education and currently she is serving in different areas includingSunday School and CPT ( Child Protection Team). She has a background Sociology and Human Relations and is currently involved in a family business. Downloadable Handout
Shintoism: Ken Koshio, who is a world class Taiko drummer artist, goes to many public schools in Arizona to share Japanese culture with younger generations using origami, calligraphy, folk tales, folk music, taiko, and other Japanese instruments. He has had Shinto training and brings the Golden Rule to life with kids and students.