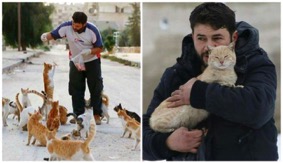 Scott Dunn was getting ready for his big moment last year to walk down the aisle and receive his diploma. Unfortunately, the night before his graduation, he suffered a near-fatal car accident. When he awoke from a medically induced coma, he was heartbroken to realize he had missed his high school graduation.

Graduation for the students of East Juniata High School in McAlisterville, Pennsylvania, had happened last May 25, but Dunn wasn’t there. After the school’s principal, Benjamin Fausey, got word that Dunn had been in a car accident but that he was recovering and released from the hospital, he reached out to the teen’s family and told them the school “wanted to do something special for him.” That “something special” happened months later, when more than half of Dunn’s class came back to recreate the original commencement ceremony just for Scott.

Dunn got to lead his classmates in a procession to “Pomp and Circumstance.” After brief speeches, Dunn was called up to receive his diploma. As he walked across the stage, the other graduates erupted in applause and cheer.

“There’s only one high school graduation people get,” Principal Fausey said, “so we wanted to do something special for Scott.”

Dunn told a local radio show that the whole event left him “speechless.”

“I don’t know how to even explain it,” he said. “I’m speechless to know that this many people are behind me.”

This will be a Golden Rule moment Dunn will never forget, and everyone involved was touched by it. Who knows how many will pay forward such kindness down the road. The Arizona Interfaith Movement salutes Principal Fausey and those caring classmates for their Golden Rule conduct. (Click here for Scott’s picture.)

Meanwhile, from the war-torn country of Syria in a city called Aleppo, there is a Syrian man who is risking his life every day to care for those who cannot care for themselves in a time of heartbreaking tragedy and devastation.

Last year, as Aleppo’s civilian population began to flee the violenceplagued city in record-breaking numbers, most had no choice but to leave beloved family pets behind in its besieged districts. Mohammad Alaa Jaleel took it upon himself to care for scores of the city’s cast aside cats, providing them with a sanctuary where they receive food, shelter and love.

“I was surprised, because at first there were about 20 to 30 cats. A year later, I have more than a hundred,” he mused. “Once, a little girl brought me a cat and she cried as she handed it over to me because she had raised it from birth. I told her I would have her cat waiting for her if she was ever able to return.” He is still in contact with the child and sends her photos and updates on a regular basis.

Despite the rapidly deteriorating humanitarian crisis underway in Syria — unrelenting airstrikes in civilian neighborhoods, a lack of access to medical facilities, food, water, and electricity among the crises facing residents — Jaleel chooses to stay, living under siege, caring for the helpless cats.

“Someone who has mercy in their heart for people has mercy for every living thing,” Jaleel reflected after being asked why he does this.

Two beautiful examples of people from different parts of the globe were demonstrating the same spirit. The Golden Rule is the same in any language, religion or culture. When it’s practiced, it makes a world of difference.

“Two beautiful examples of people from different parts of the globe were demonstrating the same spirit. The golden rule is the same in any language, religion or culture. When it’s practiced it makes a world of difference.”