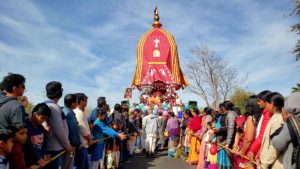 It is finally that time of the year in Arizona, when my family and I can experience one of the most colorful and multicultural Hare Krishna event — the Festival of Chariots (Rathyatra), presented by the International Society for Krishna Consciousness (ISKCON), Phoenix.

Historically, Festival of Chariots is an ancient festival of India originally held at Puri, in the state of Odisha where it is attended by millions of people. On this day, the presiding deities of the main temple, Jagannatha, Baladeva and Subhadra are taken out from the temple premises in an elaborate procession in huge chariots. The chariots are manually pulled with ropes by thousands of people accompanied by a procession of blissful dancing and singing. Only on the day of Rathyatra, the deities come out of the temple to give a personal audience to the general mass of people who otherwise may not have had an opportunity to see them. Outside of India, this festival was first celebrated in San Francisco, Califonia in 1967 under the guidance of His Divine Grace A.C. Bhaktivedanta Swami Prabhupada, Founder Acharya of the International Society for Krishna Consciousness (ISKCON). Currently, this festival is observed in all the major countries of the world including United States, Canada, South America, South Africa, United Kingdom, Poland, New Zealand, Australia etc.

The daylong festival commences with a majestic parade featuring a colorful 4-story tall canopied chariot which is manually pulled by all the participants often dressed in the vibrant traditional attires amidst delightful singing and dancing accompanied by lively music and cultural performances. Everyone, including the bystanders irrespective of their cultural or ethnic background, is welcome to take part in the parade by pulling the chariot ropes, which traditionally is believed to bring good luck and auspiciousness. The two hour- long parade is expected to begin around 11 a.m. at the Circle of life, Steele Indian School Park and will make its way for a little over a mile along 3rd Street before it takes a U-turn and ends at its site of origin at the park around 1 p.m. Upon the conclusion of the parade, attendees will gather at the festival site at the park, which hosts attractions for all ages and interest groups including kids. The live entertainment stage will feature various multicultural performances depicting India’s rich and diverse heritage.

Foodies will find plenty of cuisines to explore at the food court however, no one will want to miss the free vegetarian meal of sanctified food served to all. At the yoga and mantra meditation corner you will learn the art of harmonizing your body with mind and soul. Finally, one is welcome to check out our henna stall and get their hands tattooed with beautiful temporary henna tattoos.

This festival helps to bring peace, unity, harmony and love in human society. ISKCON Phoenix has been holding this event on a grand scale since 2017. The community is welcome to join us to experience the culture, traditions and the happiness of this joyous and auspicious festival. Admission is free, so bring your family, bring your friends, bring a smile and join the celebration! It’s Sunday, March 1st at the Circle of Life- Steele Indian School Park, Phoenix, AZ.

Pratibha (Patricia) Somaiya is a Hare Krishna representative on the council of the Arizona Interfaith Movement. ISKCON Phoenix is a non-profit organization. For additional information, please visit our website iskconphoenix. com

The Festival of Chariots (Rathyatra) is one of the most colorful Hare Krishna events. COURTESY OF INTERNATIONAL SOCIETY FOR KRISHNA CONSCIOUSNESS