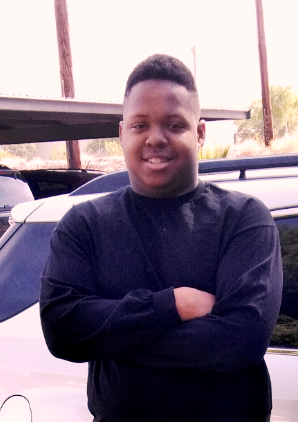 It was just another ordinary warm day in May 2017, but everything that Trevor Gentry had ever learned at his youth group, called “God’s Squad,” materialized that day. All his life, Trevor has been attending the Greater Impact Church of Phoenix and according to Pastor Jay Brown has been a regular participant in their youth group, where they have been taught to respect one another and live out the Golden Rule in their lives.

On this particular day, Trevor and his brother-in-law were walking close to Interstate 10 and Interstate 17, but for good reason, they never reached where they were headed. Ahead of them, they encountered a man who appeared to be distraught and quite anxious. As they approached him, it became quite clear that the gentleman was despondent but never expected what would happen next. Suddenly the man placed his right leg and then his left leg over the concrete barrier that separated the overhanging ledge from the road and just sat there.

Vehicles began to stop as it became evident that this man was considering taking his life by leaping from the ledge to a busy highway 80 feet below. Police tried to get to the scene, but the traffic had completely blocked the roadway. All they could do was watch to see what would happen next.

The Golden Rule Moment happened fast as Trevor turned to his brother-inlaw and said, “It looks like he’s going to jump.” Just as the subject moved closer to the edge of the ledge and began to slip off, Trevor grabbed him and put his arms around him while his brother-inlaw grabbed his leg. Quite a struggle ensued, but they both held on.

That was quite a feat since the subject was about 6-foot-4 and weighed approximately 240 pounds. But fortunately, Trevor was a defensive lineman for his high school football team and weighs in at 250 pounds and stands 6foot-3. This advantage helped him hold onto the subject while he dangled 80 feet above the roadway, where a fall would have been certain death.

It seemed like an eternity for those who were watching, but Trevor and his brother-in-law were finally able to pull him over the ledge and held him until the police arrived.

Upon officers’ arriving, the subject struggled to get away and once again Trevor was called upon to use his strength and courage to help the officer subdue the man.

It is no wonder that Arizona Department of Public Safety Director Frank Milstead later presented Trevor with an award that stated, “Mr. Gentry exhibited exceptional courage, extraordinary decisiveness and swift action regardless of his own personal safety to grab and hold onto the suicidal subject and bring him back from an 80-foot fall. For his actions, it is with great pride that Trevor Gentry is presented with the Arizona Department of Public Safety Lifesaving Award.”

The Arizona Interfaith Movement echoes the words of Col. Milstead, and it is with great pride that we will present Trevor Gentry with the Golden Rule Youth Award at our 2020 Golden Rule Banquet on April 16.

We are grateful that Trevor helped save this man’s life and modeled for all of us what it means to live out the Golden Rule. A split-second a decision had to be made, and Trevor acted on his Golden Rule moment, regardless of his own safety or well-being.

A huge shout-out of thanks to the wonderful Golden Rule training Trevor received his entire life at his church and youth group. These like-minded organizations and religious groups are the strength of America and pay great dividends when they are most needed.

Everyday life presents us with opportunities to practice the Golden Rule but perhaps seldom in the way it happened for Trevor Gentry on May 27, 2017.