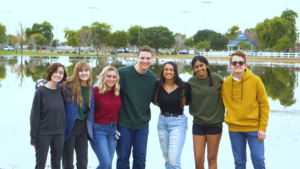 The Golden Rule: Do unto others as you would have done unto you.

This seemingly intuitive statement has traditionally been viewed as an idealistic goal rather than a tangible way of life. However, its simplicity does not discount the pivotal role it plays in community development that is the message LiveGoldenAZ aims to spread in Arizona.

The four pillars of the Golden Rule are kindness, empathy, civility and respect. Exploring the connection between these traits and prominent social issues, LiveGoldenAZ seeks to facilitate civil discourse and promote teenage engagement in the community.

A monthly television segment broadcast by AZTV7, LiveGoldenAZ is a completely teenage-led program sponsored by Arizona Golden Rule Educational Experiences (AGREE), a subset of the Arizona Interfaith Movement. I co-founded the campaign back in 2018 and now serve as the managing director and producer, coordinating each segment along with my co-host Evan Crabtree and our videographer James Kinney. Since our launch, we have conducted hundreds of interviews across the Valley, covering relevant topics from sustainability to cyberbullying to mental health.

What makes our monthly television segments unique is not only our focus on bipartisan topic areas but our inclusion of teenagers. Every month, we go out into the community and seek teenagers’ perspectives on a given issue because we believe that our peers’ voices should be respected and supported. While our viewership has skyrocketed to over 300,000, our single biggest achievement was the school we reached. East Valley High School, an alternative school in Mesa that serves students with severe socioeconomic struggles, heard of our campaign and decided to implement the Golden Rule curriculum. By amplifying the perspectives of our peers, we were able to transform the formerly problematic interactions between the students in that school and foster a respectful learning atmosphere.

Our first segment of the new year focused on civility. We wanted to break down the pillars of the Golden Rule and delve into each characteristic by seeking to understand how teenagers interact with these traits. After speaking with several students, my co-host and I came to several conclusions. First, we learned that teenagers recognize the recent lack of civility in social interaction, whether it be in politics or on social media. This finding combats the prevalent misconception that most members of GenZ fuel disrespectful discourse. Furthermore, we found that most teens see the Golden Rule and civility, in particular, to be invaluable in fostering community unity and development. Ultimately, this interview showed us that there are valuable lessons to be learned from our young people and that the teens of Arizona deserve to know that their voices are valued.

LiveGoldenAZ has brought back the idea of civil discourse in a deeply polarizing time. The conversations we engage in with other teenagers renew my hope in our generation’s ability to positively transform society. Our new segments air on the second Thursday of each month on AZTV7 at 8 a.m. and can be found at goldenruleeducation.org/ live-golden. Please follow our social media @livegoldenaz and message us for the chance to be interviewed next! Stay engaged, stay respectful and remember to Live Golden.

Nivea Krishnan is the co-founder, managing director, producer and team leader of LiveGoldenAZ.

Members of LiveGoldenAZ, which seeks to facilitate civil discourse and promote teenage engagement in the community. COURTESY OF LIVEGOLDENAZ