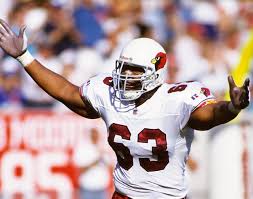 He thought he had heard and seen it all. After all, he was an all-star defensive tackle and defensive end for none other than the Arizona Cardinals. He had felt the “head-ons,” heard the groans and smelled the sweat of locker rooms beginning with his playing days at Sam Houston State, but somehow this evening was a bit different.

It’s Thanksgiving 2019. Michael Bankston finds himself at the First Methodist Church in Mesa with a room full of over 400 kids ranging in age from 6 to 17. These are not kids from the church or from the neighborhood, but they do all have a commonality – they are foster children living in group homes and they are there to enjoy a Thanksgiving meal.

Bankston works at Canyon State Academy, a school in Queen Creek with a mission to help at-risk children develop into productive adults. He even knows some of these kids. But he is there because he believes he can make a difference. Kindness, empathy, respect — these Golden Rule attributes affected Michael’s life, and he wants to give back. One life at a time, one day at a time, Michael uses his influence and stardom to give Golden Rule Moments to kids that have never had a break in life.

But Michael is not alone on this particular evening. There is one-time tackle Anthony Clement, wide receiver Mar-Tay Jenkins, wide receiver Roy Green, tackle Brandon Keith and tight end Ben Patrick have all joined him for this evening of giving back.

“You hope if you can just take them away for a moment, this is a fun time,” Michael says. “People are showing love. And this is something (the alumni) love doing.”

After the blaring speakers softened their decibels and after the kids all showed off their dancing skills, Michael and his former teammates sat down to sign autographs. But there was more than autographs taking place, there were interactions and opportunities going on. Many of these kids have lived through what Michael calls “ACEs” – Adverse Childhood Experiences. Parents might be in jail or on drugs. Some sort of abuse, whether it be mental, physical or sexual, is prevalent.

“Building relationships is huge,” Michael said. “A lot of times these kids don’t trust anybody because of their past. You put a lot of time and energy in showing the kids there is a different way, but their triggers are all different. It can be tough to bridge the gap and break down those walls.”

Micheal gives a hug to one teen he knows before they take a selfie. He gives good-natured grief to yet another who dares to wear a Raiders jacket in front of so many former Cardinals players. In the din of the organized chaos, smiles are everywhere.

These Golden Rule actions and many more reasons prompted the Arizona Interfaith Movement to honor Michael Bankston with a Golden Rule Award on April 16 for the great work he now does in our community. Not only is he involved with the shaping of young lives at Canyon State Academy, but he serves on the boards of multiple organizations and is a much sought after speaker.

The cheers, shoulder pads, cleats and pigskins are a dim distant past for Michael. At one time, it was his life dream to play in the NFL. He’s been there and done it. What motivates Michael these days is helping a young boy or girl, whose future is uncertain at best, develop into a productive, principled young adult who, too, can forget their past and begin to live their life for others, just like their mentor, Michael Bankston, who gives Golden Rule Moments to kids every day.

Rev. Larry Fultz is the executive director of the Arizona Interfaith Movement.