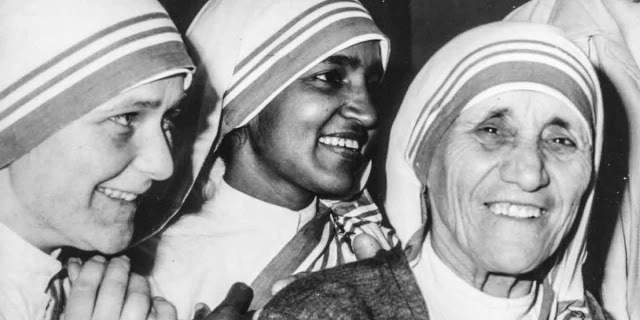 Many of the world’s religions honor saints. They are human beings distinguished for their exemplary qualities. They are not perfect but they have led their lives trying to do what is good and have achieved success in their quest for a life for others but more importantly they are dedicated for the love of God.

My visit to Sweden and Norway reminded me of women and men recognized for their excellence by the Nobel Prize. I was reminded of Mother Teresa, now called Saint Teresa of Kolkata. I was fortunate enough to see her in person during her visit to Phoenix. She was born Agnes Agnes Anjezë Gonxhe Bojaxhiu in what is now Skopje, the capital of North Macedonia in a town inhabited by both Muslims and Christians. Her family lived peacefully with this mixed community and ministered to both religious groups by sharing with them food and hospitality, but it was young Agnes’s desire to be a missionary in a far flung land. At an early age she left her native country. She stopped briefly in Ireland to learn English and then set sail for India where she became a missionary for which she served as a school teacher . When she made her vows with the Sisters of Loreto, she took the name Teresa after Saint Therese of Lixieus, the patron saint of missionaries.with the Sisters of Loreto.

During a an annual retreat trip to Darjeeling, she said that she heard a “call within a call” tto ward a more involved religious life, . She was to leave her work as a teacher to minister to the poorest of the poor in the slums of Kolkata. Having already made her vows, she sought the permission of the Church to pursue this daunting call to service.

It was a life of extreme challenge to serve the poor in the slums. Several women eventually followed her work and life of prayer and the group became known as the Missionaries of Charity, known for wearing saris with a blue border. Mother Teresa and her sisters established orphanages and clinics, gave comfort to the dying and accorded them dignity in death.

Mother Teresa was met with both acclaim for her compassionate work and protests as she was perceived to represent an opposing faith. Eventually the Missionaries who were Indians themselves were accepted in this predominantly Hindu country. Their work spread with more than 600 missions in 133 countries serving people of various countries and faiths. Mother Teresa’s religious order now has more than 4,200 nuns ministering to orphans, lepers, and HIV-AIDS patients. In 1982 Mother Teresa stopped the war between Israelis and Palestinians and courageously saved children in an orphanage caught in the midst of war in Lebanon. She appealed to all humankind for compassion and the alleviation of pain and suffering in the world.

The Nobel Committee awarded Mother Teresa the Nobel Prize for Peace in 1979 regarding “her work for bringing help to suffering humanity.” Pope Francis canonized her as a saint Teresa of Kolkata in 2016. For some, however, she was already seen as a living saint during her life.

The words of Mother Teresa that live in my heart is the thought, “Do small things with great love”. Greatness in her estimation is measured not by one’s wondrous acts but by the loving intent. Remember, Mother Teresa’s actions were done for the love of God, as spoken by Jesus in Matthew 25:40:

‘Truly I tell you, whatever you did for one of the least of these brothers and sisters of mine, you did for me.’

Let us all be saintly by doing small acts of kindness but with great love.

P.S. To learn more about saints and share your thoughts about sainthood in various faiths, support and join the Arizona Interfaith Movement HERE!