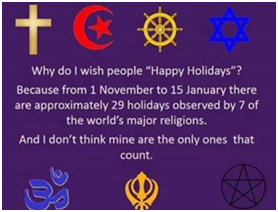 During this time of the year, it has become increasingly awkward as to know how to wish people a happy holiday.

The U.S. has traditionally been a Christian nation and while, according to the national ARIS study, about 75% of American adults currently identify themselves as Christians that number is decreasing by about 0.8 percentage point per year. If this rate continues, Christianity will become a minority religion in the 2030s. Most Americans will then either have no religious affiliation or will identify themselves with a non-Christian faith.

With that in mind, I like to say to all my non-Christian friends, “Happy Holidays” because from November 1 to January 15 there are about 29 different holidays observed by 7 of the world’s major religions.  It’s not that I am ashamed, as a Christian, of the wonderful story of Christmas and the angels bringing the message of “peace on earth and good will toward all men”. It’s just that I want to respect the celebrations of others and I don’t think mine is the only one that counts.  Having said that, let me share with you some of those celebrations that will be happening during this holiday season.

BODHI DAY – Buddhists celebrate Bodhi Day (a.k.a. Rohatsu) on DEC-8, or on the Sunday immediately preceding. It recalls the day in 596 BCE, when the Buddha sat beneath a Bodhi tree — a type of fig tree — and is believed to have achieved enlightenment, thus escaping the repeating cycle of reincarnation: involving birth, life, death and rebirth. A descendent of the original tree is the most important of four holy sites of Buddhism.

HANUKKAH – Our Jewish friends celebrate Hanukkah (a.k.a. Chanukah; “Feast of Dedication” or “Festival of Lights.”). This is an 8-day observance which recalls a miracle in the Jerusalem temple during a war fought by the Maccabees in the cause of religious freedom. Temple candles only had enough oil to burn for a single day. Yet they burned for eight days. Jews light candles on a menorah — two on the first day, three on the second, to nine on the eighth day. The first of Hanukkah begins at sunset on December 10 and ends at sunset on December 18 of this year.

EID al -ADHA – Muslims‘ holy days are fixed to the lunar calendar. On successive years, the days migrate about ten days earlier as viewed on the Gregorian calendar. Eid al-Adha (a.k.a. the Feast of Sacrifice or Day of Sacrifice) occurs during the 12th lunar month of the Islamic year. This immediately follows the Hajj (pilgrimage to Mecca). It recalls the day when Abraham intended to follow the instructions of God and sacrifice his son Ishmael. During 2006, it was celebrated on both JAN-10 and DEC-31. It is an unusual occurrence to have two Id al-Adha holy days during one year; it happens only about three times each century. Each year, the observances migrate ten or eleven days earlier according to the Gregorian calendar. These holy days have left December but will return in about three decades.  This year it was celebrated on July 30-31.

KWANZA – In the United States, roughly five million people celebrate Kwanzaa each year.  Kwanzaa is a seven-day holiday that celebrates African culture. It begins on December 26th and ends on January 1st. On the sixth day of Kwanzaa, there is a Kwanzaa Karamu, which is a big feast. Gifts of Kuumba (creativity) are given to loved ones. Kwanzaa’s also celebrated through lighting the Kinara, performing and listening to traditional music and discussing African principles and history.

DIWALI – While this holiday falls a little bit before the rest, Diwali, or the Festival of Lights, is a five-day long Hindu holiday celebrating life and the victory of good over evil. Taking place in October or November, each day of Diwali has a different legend it celebrates, but the holiday is filled with fireworks, feasts, and family. The date of Diwali is determined based on the Hindu lunisolar calendar.

Las Posadas – For our friends south of the border there is a celebration from December 16th through December 24th called Las Posadas.  It is also celebrated by many Hispanic families in the United States. It’s a nine-day celebration before Christmas, beginning with a procession with candles, songs and sometimes even people playing the parts of Mary and Joseph who lead the parade. Every night of Las Posadas is celebrated with gifts, piñatas, song, parties, tamales and prayer.

OMISOKA – Because my dear daughter-in-law is from Japan I must include this celebration as well. Omisoka is a very popular end-of-year celebration in Japan. Families perform Ōsouji (the big cleanup) in order that the home will start the new year clean and tidy. According to Wikipedia: “A few minutes before midnight, every temple prepares Amazake (sweet sake), and crowds gather around a metal gong which is struck 108 times. This number is believed to be number of sins and ill thoughts that can take place in a human mind.”  Striking the gong drives these sins away.

Did I miss any?  I am sure I have and would be delighted if you would let me know but please wait until after the holidays, so I don’t feel so bad that I missed yours.  I promise next year I will remember.

Regardless of what faith you hold dear, or no faith, our prayer from the Arizona Interfaith Movement is to wish you and those you hold dear happiness, health and blessings during the holidays and all through the New Year.  If you suffered loss or hardship during this time, please know that our hearts go out to you and that many people from all faiths will be praying for hope and healing, especially during this holy time of the year.  And may the Golden Rule be the guiding principle for all your holiday festivities especially when greeting one another.

Finally, we’re deeply grateful to all of you for your generous time, resources, and faithfulness to our cause especially during this exceedingly difficult year of 2020.  Because of you we can make a difference and bring civility, respect, kindness, and empathy to a world that needs it so badly.