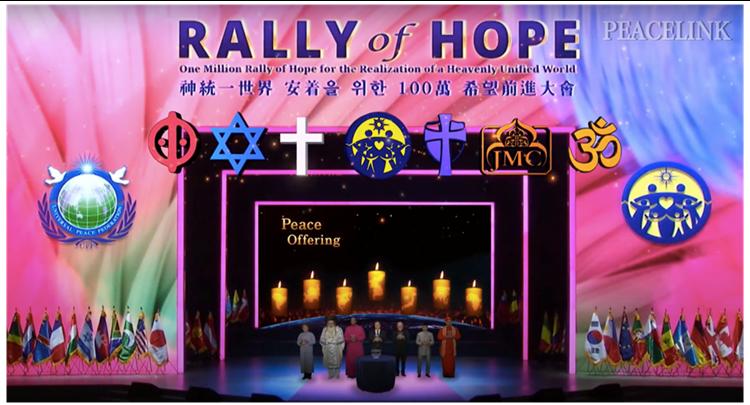 It is amazing what this year has brought: I was in a virtual audience of over a thousand people on December 5. I was sitting in my bedroom in front of my laptop. The rest of my family were in the other room enjoying a fantastic online presentation of the third Rally of Hope. I was intermittently visible to them as a tiny square in the background video wall of the broadcast.

The Mother of Peace stated, “Everyone desires peace, but peace does not come easily. If it were as commonplace as stone on the side of a country road or trees on a mountainside, we would never have experienced the terrible wars and conflicts that plague the human world. To experience true peace, we must first practice true love without expectation of reward.”

Mother Moon continues the work of her late husband, Rev. Sun Myung Moon, to speak about God’s urgent heart to, “realize His dream on earth together with humankind.” Scripture talks about the original human couple and the loss of their intended oneness. Rather than welcoming and attending the Heavenly Parent, the worship of the incomplete image of a Heavenly Father caused men to dominate.

The Mother of Peace gained recognition from several heads of state while traveling the globe prior to the pandemic. She gave God’s blessing and rebirth to husband-wife couples in large arenas, whole nations, and to the continent of Africa.

The second rally on November 22d focused on gratitude. The 77 year-old peacemaker has emphasized gratitude over circumstance throughout her tumultuous life. This time she led a celebration to honor the sacrificial effort by several nations under the UN command to defend freedom during the Korean War, 70 years before. See “One Million Rally of Hope” on YouTube.

Notwithstanding the challenges of 2020, all 400 years since the 1620 landing of the pilgrims seeking freedom of worship contained periods of struggle. The Bible reports that periods of 4, 40, and 400 are significant, such as Jesus’ 40 days of fasting and Abraham descendants’ 400 years of slavery in Egypt. It is time to honor God and bring the US “back to its original founding spirit,” to prioritize the universal transcendent realm of divine love beyond the material.

Today her true parental counsel is, “Please forgive the American politicians and work together in oneness. Please remember that the only way for the United States to maintain its existence is through harmony and unity.”

Arizona Interfaith Movement member Staffan Berg may be biased after dedicating over four decades to the vision of world peace. However, he does believe there is a unique opportunity right now to create a better world. He currently serves at the Arizona chapter of the Family Federation for World Peace and is the Pacific West director of the Universal Peace Federation. Connect at rev.berg@gmail.com or text 480.600.1764 for more information.