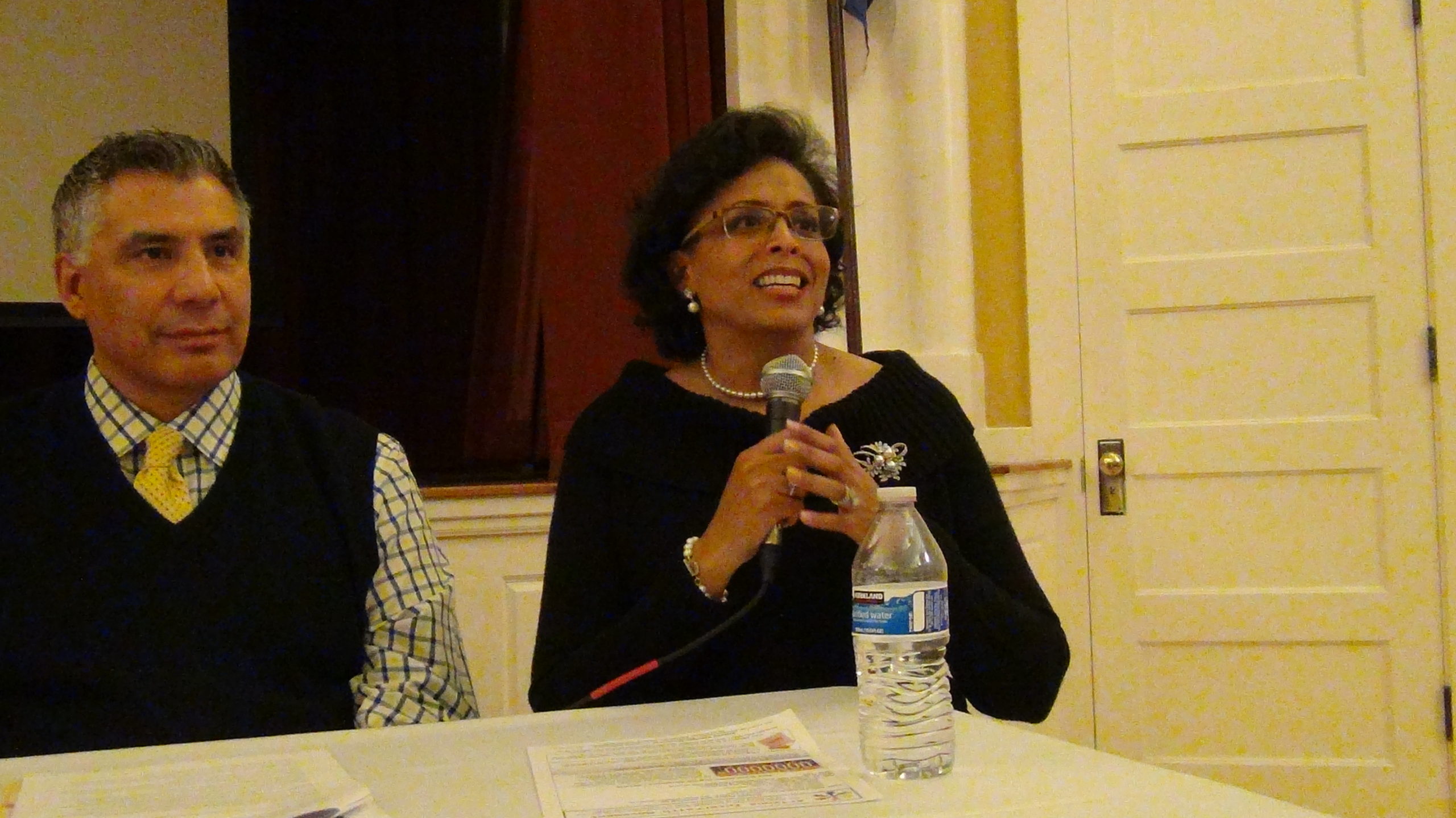 We invite you to view our video of the Jan. 17th community Faith Forum, entitled, FAITH AFTER THE ELECTION, then continue the dialogue via our Facebook page, AZIFM.

Here’s what we grappled with: America’s new president will be sworn in on January 20th, 2017. What does the new administration mean for faiths and houses of worship? How do we support those faiths, groups and individuals who may feel marginalized? How can we work together to heal our fractured society? Join us tonight as our panelists engage in open and frank discussion about how we can best live out the principles of our faith in these challenging times.

Please click on what you wish to view via You Tube on our website:
Video 1 – Intro
Video 2 – Program with Q & A

Program – Our panelists shared briefly, followed by Q & A. We’d like to thank our panelists: 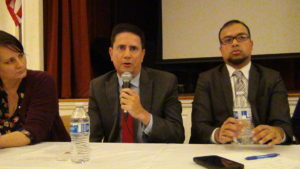 Celeste Plumlee, Unitarian Universalist – former elected official for Tempe: is the Hunger Program and Policy Manager at the Arizona Community Action Association and a former State Representative for Legislative District 26. She is an Arizona native and has been a member of the Valley Unitarian Universalist Congregation for 30 years. Celeste has a Bachelor of Arts in Sociology as well as Master of Social Work and Master of Public Administration degrees, all of which she earned at Arizona State University. Celeste is a Fellow of the Flinn-Brown Civic Leadership Academy, and a graduate of Emerge Arizona Class of 2015 and Tempe Leadership Class 26. She is the Chair of the Board of Directors for the Arizona Coalition to End Sexual and Domestic Violence and is a member of the Kiwanis Club of Tempe. Professionally, she has served a variety of roles in social service agencies including the Chandler and Gilbert Community Action Programs and the Girl Scouts Arizona Cactus-Pine Council.
– David Lujan, a former elected official: is the Director of the Arizona Center for Economic Progress. David is a former member of the state Senate and House of Representatives, has worked in public policy in Arizona for 20 years. He served as an assistant attorney general advising the School Facilities Board, legal counsel for the Arizona senate, a staff attorney providing legal services to abused and neglected children and, most recently, as a public policy director for Reading Partners, an organization that provides services to young children struggling in school. David also served as chief administrator for Arizona State University’s Preparatory Academy in Phoenix, a public charter school for preschool through 12th grade students. David earned his law degree at the Sandra Day O’Connor College of Law at ASU.
–

Carlos Galindo-Elvira, Jewish – director AZ region of Anti-Defamation League: is the AZ Regional Director for the Anti-Defamat ion League (ADL). In this role, Carlos is responsible for fundraising, p r ogr am d eliver y, lead ership development , communication s, government relations, fact – finding/research and office management to advance the ADL’s mission within the state of Arizona. Carlos formerly served as Chief Development Officer for Valle d el Sol, a non-profit agency providing healthcare, human service and leadership development programs. Carlos was a Special Assistant to former U.S. Senator Dennis DeConcini in the areas of civil and human rights, Department of Justice, and Hispanic and Native American affairs. In 1987, he sponsored and wrote legislation ranging from a policy on anti-discrimination to a paid Martin Luther King Holiday. Additionally, he was sponsor of the resolution designating a recognized holiday honoring César Chávez. Carlos is a graduate of Arizona State University with a BA in Spanish; is a graduate of Valle del Sol’s Hispanic Leadership Institute, Class of 2000, and ADL’s GLASS Lead er sh ip In st it u t e (2009). He participated in the Mexican – American Solidarity Foundation as a Fellow in 2002, traveled to Vietnam in 1997 as a delegate with the American Council for Young Political Leaders, a delegate in 2004 with Project Interchange in Israel, and a participant with the American Israeli Education Foundation visit to Israel in 2015. He was also selected as a Fellow by the Virginia G. Piper Charitable Trust in 2012. Currently, Carlos is a member of the Raú l H. Castro Institute Advisory Board on the Arizona Jewish Historical Society Board of Directors. He has received a long list of well-deserved distinguished Awards.
– Saud Inam, Muslim – New Operations Director for the Islamic Community Center of Tempe—one of the largest and most diverse American Muslim communities in Arizona. He is also an American Muslim activist, social entrepreneur, blogger, writer, and a community organizer. He moved from Jacksonville, FL, grew up to Atlanta, Georgia in 1999. He has a B.A. in International Affairs and Religion. In DC, he began to assist with various community projects, programs, and initiatives in the area. Later on, he began creating, developing non-profit organizations and assisting various non-profit organizations and small businesses with organizational, marketing and branding strategies. Later, he traveled to China as part of his International Business program, where he conducted research on Interfaith Dialogue and Cooperation. Now in AZ, Saud is the CEO/Founder of EEI Strategic Consulting, the Executive Director of Muslim Heroes, and also serves as a board member for the Muslim Wellness Foundation, and is always in search of many more opportunities to help educate, empower and inspire others to build bridges of understanding, empathy and love and help serve their communities.
– 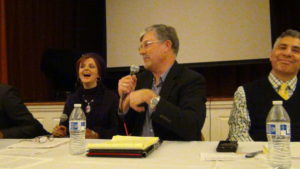 Judge Mark Anderson – Former State Representative and former Justice of the Peace, Unification, Mark Anderson is committed to public service. First elected to the State Legislature in 1994, Mark represented Mesa for 14 years, serving in both the State House and State Senate. In 2010 Anderson was elected to the position of Justice of the Peace for the West Mesa Justice Court. In his first year as a judge, Anderson resolved a backlog of over 100 DUI cases that were over a year old, instituted a life skills program for defendants, and authored legislation to modernize the Justice Court statutes. In 2008, Anderson was a Republican candidate for US Congress and Arizona Co-Chairman of the Mitt Romney for President Campaign. In 2006, Representative Anderson prime-sponsored legislation to address the meth problem in Arizona. Anderson’s bill, which was passed by the legislature and signed by the Governor, was a comprehensive approach to dealing with the meth epidemic by allocating resources for interdiction, treatment, and prevention services. In 2003, Representative Anderson was the prime sponsor of SB1291 which created a prison transition program to lower the recidivism rate and save taxpayer dollars being spent to incarcerate non-violent drug offenders. He also authored legislation to enhance service-learning in the public school system and a bill to establish a pilot program to open Child Protective Services hearings to the public. Representative Anderson was also the author of legislation which helped allocate a portion of federal welfare dollars to marriage skills courses for the purpose of reducing the number of divorces in Arizona. He sponsored Arizona’s Charitable Choice law which requires that state government not discriminate against faith-based organizations when contracting for services, and was also the prime sponsor of the nation’s first tuition tax credit bill for private and public schools passed in 1997. Over the years this legislation has enabled many parents to send their children to the religious or private school of their choice and provided millions of dollars to public schools for extra-curricular activities. Other important bills Anderson authored include: a charity tax credit for donors to private, non-profit groups helping low-income citizens; an abstinence education program that reduced teen pregnancy, and a program that encourages churches to assist in the placement of foster children in their communities, among others.
Judge Anderson is married and he and his wife Lucia have three children, Kendra (32), Nedd (30) and Ethan (26) and five beautiful grandchildren.

— Rev. Karen Stewart, Director of Evangelism and Discipleship at First Institutional Baptist Church: In addition to her ministry as the wife of the Senior Pastor, Reverend Karen also gives direct leadership to the evangelism aspect of the E&E Connection. She mobilizes FIBC’s ministry leaders and members around evangelism, ensuring that all FIBC ministry events have an evangelistic objective. Additionally, she orchestrates and oversees opportunities for Christian education (including writing curriculum) that attract and engage FIBC members at all levels of their spiritual development, providing classes and seminars that are Biblically based, relevant and appropriately led by skilled and knowledgeable teachers and presenters.
Education: BA in Religion from Ottawa University, 1998; Certificate in Nonprofit Management from ASU, 1999; MATS from Golden Gate Seminary, 2002