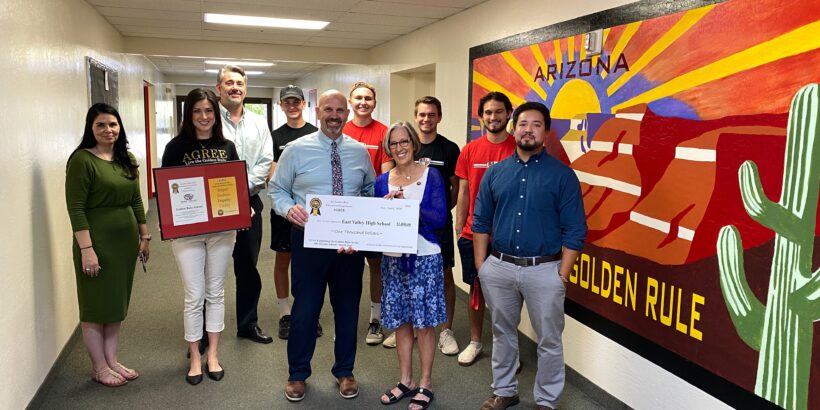 Each school has a unique story to tell. The following story is about an Arizona school that created positive change by teaching and focusing on the Golden Rule.

As a former Marine and Phoenix police officer, John Baker was seeing the same repetitive behaviors amongst troubled youth that lead to life-altering penalties. He wanted to affect a child’s life before it got to that point. He wanted to create change in that vicious cycle. To make a greater impact, he decided to focus on education and made a major career switch, high school principal. He was hired by East Valley High School, a free public charter school in Mesa.

Then something golden happened to shift Principal Baker to a solution.

He met with a representative from the AGREE program and realized EVHS would be the ideal place for the Golden Rule to have the biggest impact. AGREE has a mission to “provide educational experiences with high academic standards” and a vision to create a “world of civility, respect and harmony among all people with the Golden Rule as the standard for conduct” while focusing on four compass words: “Kindness, Empathy, Respect and Civility.”

Principal Baker realized that to create an impact, he would need to start with the staff.

“I started with the staff showing the students how to treat each other regardless of how we are being treated,” he says. “We still treated them with kindness, respect, empathy and civility.”

The students felt the difference! One student remarked, “These teachers are actually proud of us.” The effect extended to how the students interacted with each other as students began to show respect and civility in the hallways and during class. It was thrilling to witness this firsthand and see teachers speaking with empathy towards the students, using meaningful words and encouraging tones, and hearing the respectful way students were interacting with their teachers and visitors. The “Golden Rule License Plate” painted on a central campus wall was also impressive to behold. Perhaps, the climax of the story is in the correlation between the Golden Rule and the EVHS graduation rate. They went from a 67% graduation rate to a 94% graduation rate in just one year, the same year Principal Baker chose to put the Golden Rule into action.

Because of their schoolwide effort to live the Golden Rule, these “Golden” moments emerged as a dynamic impact. East Valley High School was recognized as a Golden Rule School on AZTV, Channel 7, sponsored by Bashas’ and received $1,000 for their implementation of the Golden Rule. Along with Principal Baker, the AGREE team extends a challenge to other schools to implement the Golden Rule by choosing to treat others the way you want to be treated no matter how you are treated in return.

Kendra Ruth is the AGREE Development and school liaison.

The Arizona Jewish Historical Society is set to honor an exceptional man next month. Oskar Knoblauch spent the last 25 years teaching innumerable students in Greater Phoenix about the Holocaust,
View on Facebook
·Share

Share on FacebookShare on TwitterShare on Linked InShare by Email

What a great idea to practice in your own faith tradition and end this year on a positive note 💛🌷💛 #LiveTheGoldenRule
comeuntochrist.org/light-the-world-2020 ... See MoreSee Less

This Christmas season, help us #LightTheWorld by thinking of someone you can serve each day—following the example of Jesus Christ.
View on Facebook
·Share

Share on FacebookShare on TwitterShare on Linked InShare by Email