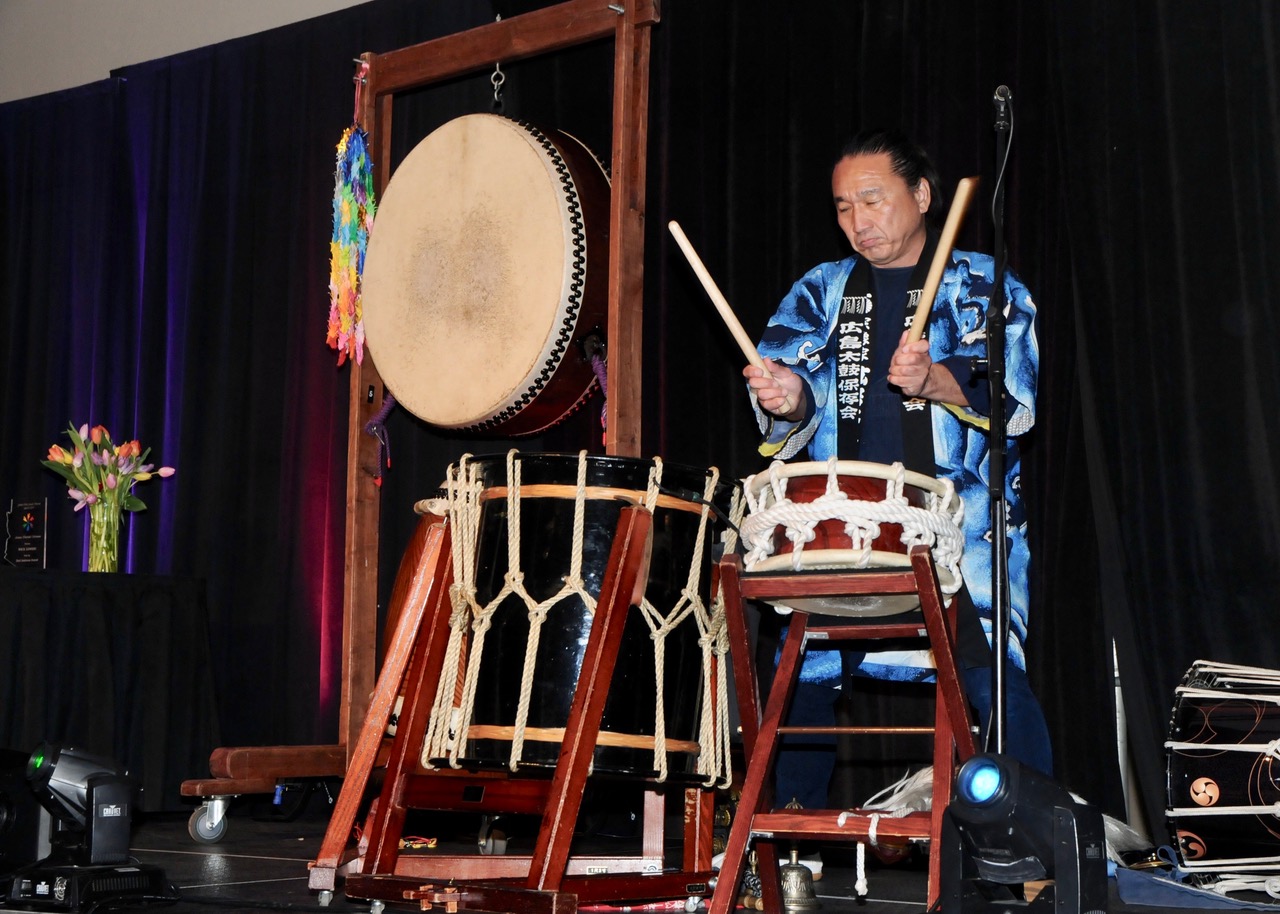 Ken Koshio has been beating on drums since he was a young boy in his native country of Japan, where he saw the effects and was told of the devastation and tragedy of Hiroshima and Nagasaki. Yet, who would guess a Golden Rule Moment would shift Ken’s life events right here in the U.S.? Not even Ken, but here is how it happened … In 1998 Ken moved to the United States, where he hoped for new beginnings. For seven years he was a folk/ rock musician in Los Angeles, but the events of 9/11 changed everything.

He felt a special calling, a Golden Rule moment, to coordinate all his talents into bringing some measure of hope to the people affected by the Twin Towers tragedy and to the people of America. Thus, the Thousand Cranes Tour was born.

From LA to New York, on old Route 66, Ken and his entourage folded origami cranes as a symbol of peace.

Others heard of his quest and joined in to help.

On the day they reached Ground Zero, Ken and his group presented 10,000 cranes as prayers for a more peaceful world.

This sent a Golden Rule moment into deeper purpose for Ken. When he banged the drums, he related to his Japanese roots of feeling the heartbeat and connection to all people in a profound way. He began to practice taiko drumming seriously. Fast forwarding, Ken ended up in Arizona, close to Route 66, performing around the world bringing his messages of peace.

Spending hours traveling on the road, he connected with another vehicle for peace, the “AZ Golden Rule” license plate, which says “PEACE 66” / “Live the Golden Rule.”

This commemorates that memorable Thousand Cranes trip along Route 66.

He is the only person living outside of Japan who has a certified teaching license of Hiroshima Jidaiko (indigenous taiko drum) from the Hiroshima Preservation Society.

He was trained by Mr. Munakata, a survivor of the Hiroshima bombing.

Ken strives to expand and pass Munakata’s knowledge and experiencesabout Hiroshima by preserving its ancient taiko rhythm for a peaceful world.

At his concerts today, Ken collaborates with other world-class artists, such as six-time world champion hoop dancer Derrick Suwaima Davis and many local indigenous artists to create stage shows that illustrate his message for peace.

He unashamedly brings cultures and languages together in such a marvelous way. Attendees realize that music and the arts is a universal language speaking louder than the hatred and distrust that is heard around the world.

In 2013 Ken went to India to be a special guest of a world music orchestra, which set a Guinness World record. He received a Music Artist, Mayor’s Arts Award in 2015. He was nominated to the Governor’s Arts Award 2016, Artist Category. He is absolutely a gift to our turbulent world.

Thanks, Ken Koshio, for being a warrior for peace and for blessing the world with your Golden Rule Moments.