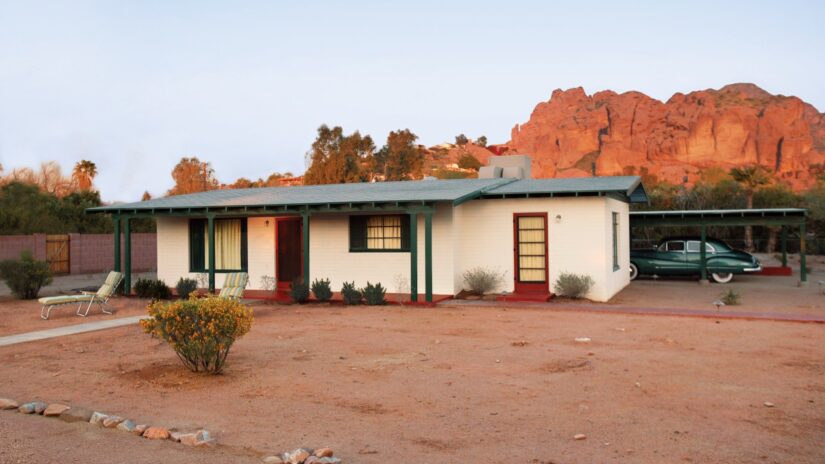 L. Ron Hubbard honored on 70th anniversary of his arrival in Phoenix

As Scientologists around the world look forward to the celebration of founder L. Ron Hubbard’s birthday, an award presented by the Arizona Interfaith Movement pays tribute to his seminal work in Phoenix.

A brilliant sunset burnished Camelback Mountain overlooking Scientology founder L. Ron Hubbard’s Phoenix home and created the perfect backdrop to a very special presentation. This is where Rev. Larry Fultz, Executive Director of Arizona Interfaith Movement, presented an award to the L. Ron Hubbard’s House at Camelback and the Church of Scientology Phoenix.

The plaque states: “Presented in Commemoration of the 70th Anniversary of L. Ron Hubbard arriving to his Camelback Home where he founded the Scientology religion. A profound philosopher, humanitarian and author, Mr. Hubbard lived by the golden rule and inspired countless others to strive toward the creation of a world of harmony, goodwill and peace, as reflected in his writings.”

“The award is very special for us considering the accomplishments over these 70 years,” said Rev. Ginny Leason, Director of Public Affairs of the Church of Scientology Phoenix and board member of Arizona Interfaith. “We follow Mr. Hubbard’s principles of goodwill and peace and thank Arizona Interfaith for this plaque and their application of the golden rule.”

It was here at the foot of the mountain that L. Ron Hubbard’s research led him to discover that man is an immortal spiritual being. His experience extends well beyond a single lifetime. His capabilities are unlimited, even if not presently realized.

“Man can save his soul,” he wrote. “Like the bright cool dawn after a night of prison and of thunder Man can taste that freedom sought so long.”

Scientologists traveled to Phoenix from across America and abroad to attend three Congresses he held here. And the most accomplished among them attended seven Advanced Clinical Courses that lay the foundation of the religion.

To hear L. Ron Hubbard describe his spiritual journey, watch “Trail of Discovery”— an episode of the original series L. Ron Hubbard ‘In His Own Voice.’

The Church of Scientology Phoenix has served a growing congregation since 1974, and moved to its headquarters on the southeast corner of 44th Street and Indianola Avenue in 2012, when it was dedicated by Scientology ecclesiastical leader David Miscavige.

The Scientology religion was founded by author and philosopher L. Ron Hubbard. The first Church of Scientology was formed in Los Angeles in 1954 and the religion has expanded to more than 11,000 churches, missions and affiliated groups, with millions of members in 167 countries.

For more information on Scientology or to visit a church near you please visit scientology.org.

The Arizona Interfaith Movement’s mission is to build bridges of understanding, respect, and support among diverse people of faith through education, dialogue, service, and the implementation of the golden rule.

Rev. Ginny Leason is a Scientology Council representative and AZIFM Board secretary.