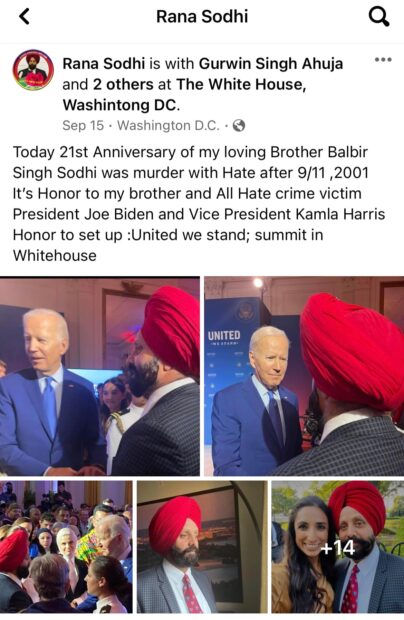 President Joe Biden recognized Rana Singh Sodhi, brother of Balbir Singh Sodhi, the Sikh who was mistaken for a Muslim and killed in the days after the 9/11 terrorist attacks in the United We Stand Summit held at the White House on September 15, 2022.

In welcoming the honored faith leaders, Vice President Kamala Harris noted that hate crimes reached their highest rate in more than a decade in 2020. “We have seen our neighbors, our friends, our loved ones attacked simply because of who they are or where they pray,”

Mesa Mayor John Giles in a tweet said, “I was honored to join fellow mayors at the @WhiteHouse#UnitedWeStand summit today, to talk about the importance of bipartisan work to bridge divides and promote understanding. Leading with courage is the right thing to do.”

Pres. Biden said that “there’s a throughline of hate, from massacres of Indigenous people to the original sin of slavery, terror of the (Ku Klux) Klan, anti-immigration violence against the Irish, Italians, Chinese, Mexicans — so many others laced through our history.” And that “there’s a throughline of violence against religious groups — antisemitic, anti-Catholic, anti-Mormon, anti-Muslim, anti-Hindu, anti-Sikh. That throughline of hate never fully goes away. It only hides.” He acknowledged that while the killing of Balbir Singh Sodhi exemplifies the “universality of grief, there is also love and hope.”

Thank you, Rana Singh Sodhi and Mayor John Giles. The Arizona Interfaith Movement stands united with you. To echo Mayor Giles, I am calling all Arizonans that we lead with courage to do the right thing. Oppose discrimination and hate in all forms.

For a text of President Joe Biden’s speech:

PS Rana’s Restaurant, Guru Palace will be one of the Indian Restaurants providing food for Experience Interfaith on October 27th! Here’s the info / registration link for this free event: https://interfaithmovement.com/experience-interfaith/