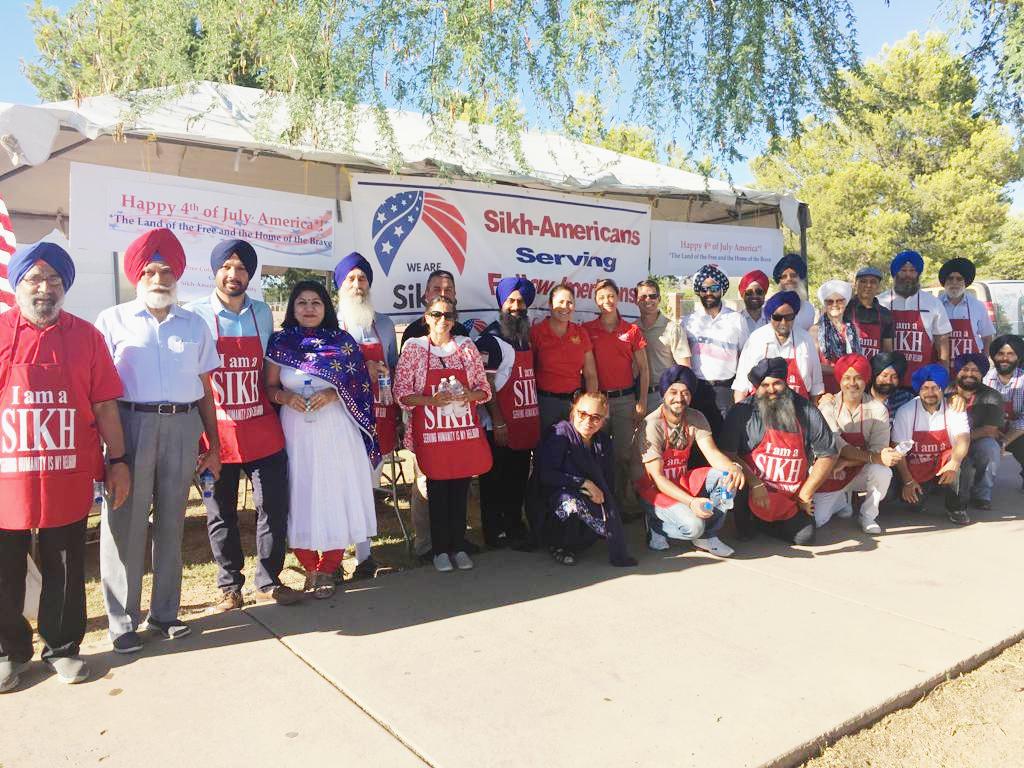 Many faiths’ sacred writings include guidance about serving others being related to serving the Most High. For example, “When you give a cup of water to the thirsty, you give it unto me.” This is a paraphrased message that Jesus taught his disciples. According to the Sikh sacred scripture, there is a similar passage that reads, “Serving humanity or God’s creation is akin to serving God himself.”

Everyone living in the Valley knows the torture of the heat, especially during our celebrative time in July, when many attend the always popular fireworks show. The heat, however, did not stop a group of our fellow citizens from being prompted by a Golden Rule Moment – and showing an act of kindness and empathy.

The metro Phoenix Sikh community, though small in number, has a big heart. Its members came out this day in July to serve the creation of God almighty on one of the hottest days so far this year with the free distribution of cold water bottles, simply because they believe in that God-given dictum, ‘Serving humanity or God’s creation is akin to serving God himself.’ Close to 40 Sikhs started to gather around 2:30 p.m. at Steele Park, located at Indian School Road and Central Avenue in midtown Phoenix, on Independence Day. By now, the temperature in this desert city was hovering close to 107 degrees. Not bothered by the heat, they got to work. They first erected a tent at the entrance of the park and began to distribute the cold water bottles that they had bought a day before and stored in a 26-foot-long refrigerated truck. Once the tent was raised, the Seva (community service) started. They handed out 20,000 bottles of cold water and were not finished until after the fireworks show had ended around 11 o’clock.

It was mentioned by the Phoenix Police Department that an estimated100,000 people attended the event. Serving 20,000 water bottles was not an easy task, but the 30-40 members of the Sikh community did it. Most of them wore an apron stating, “I am a Sikh! Serving humanity is my religion.” Their tent banner read, “Sikh-Americans serving fellow Americans,” with a glorified Sikh turban courtesy of the National Sikh Campaign.

As you can imagine, there were plenty of hugs, thank yous, “God bless yous,” and “God bless you and the Sikh community,” repeated over and over again by satisfied attendees.

While the temperature rose to almost 107 degrees, every Sikh man, woman and child was exuding happiness, satisfaction and a sense of pleasure. After all, what could have been better than celebrating the Independence Day of their beloved country than by serving their fellow men and women with a spirit of selflessness in accordance with the Sikh concept of “Nishkaam Seva.”

The Police Department cooperated and appreciated the kind spirit being shown. The Sikh turbans, red, white and blue, were seen everywhere. The atmosphere was that of a picnic, and it was enjoyed by everyone.

At the Arizona Interfaith Movement, where we seek to build bridges of understanding, respect and support among diverse people of faith, we are blessed to have many Sikh members. It’s a natural fit, since we all strive to implement the Golden Rule in our actions.

On a day when many of us were thinking of how we could beat the heat, the Sikh community was thinking how we could serve our fellow citizens. I speak for the Arizona Interfaith Movement when I say, we are so proud of our fellow members for modeling for all of us what it means to make a Golden Rule Moment a reality for so many people as they enjoyed one of America’s mos t treasured days, our day of independence.